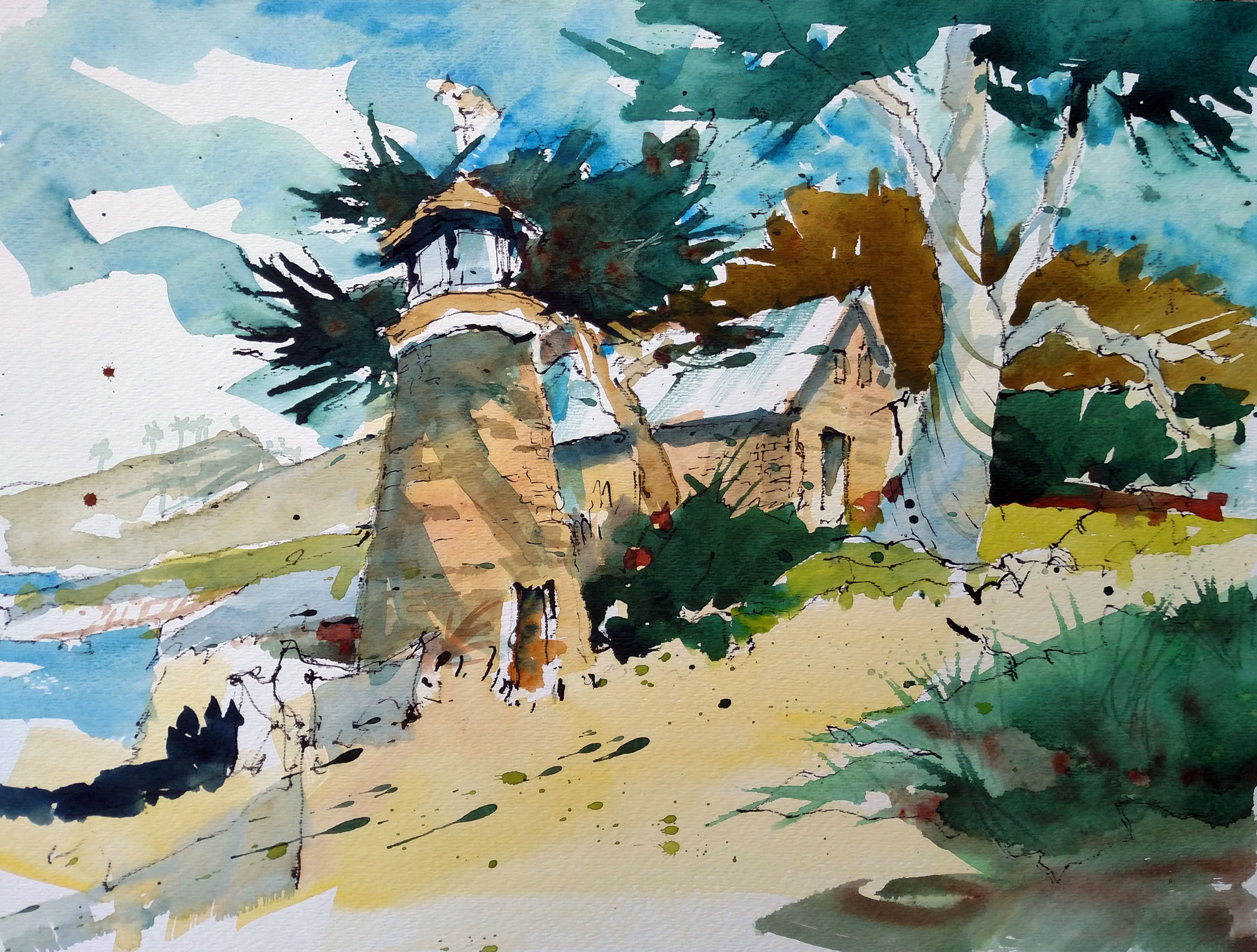 Are You Ready for Inktober?

Though subject and style vary, this exhibition celebrates six accomplished local watercolorists and their devotion to this time-honored tradition. Come and experience the ethereal qualities of this immersive medium in our upcoming show… “Just Add Water”!

There’s something about Autumn… the crisp air, crunchy leaves, mulled cider… and INK!

Ever since primitive man spied the squid, he was gripped with envy and devoted much of his resources to imitating the murky power of the cephalopod. With breakthroughs in acrylic polymers and synthetic pigments, we have more ink to draw on than ever before (pun intended), and we thought it a good occasion to take stock of where we started and where we are, ink-wise.

Ink has undergone many changes since its arrival and now exists in a myriad of forms, from fast-flowing dye inks to thick, oily printmaking inks. Inks were independently developed by many cultures, as far back as the Neolithic period. Ink can be rather simple in its composition, consisting of colorant (originally earth pigments or blackened plant soot) and water. This concoction is commonly called “India Ink”. Though variations abound, this formula has remained fairly consistent over time.

Some of the largest strides in ink technology have been made in application tools. Traditional scribe tools, like brushes and dip pens, still retain devout followings. Modern advances in the form of nylon and fiber tips provide the inker with even more options to create stunning, lasting results.

Here are some of our favorites:

Dip pen: The tried and true classic, descended from sticks and feathers. Elegant in its simplicity, and able to deliver a variety of lines. Beloved by artists, calligraphers, and cartoonists.

The brush: A time-honored tool for mark-making. Soft natural hairs on a bamboo handle in the Asiatic tradition, and a wealth of snappy modern synthetic fibers keep brushes an omnipresent tool in the inking arsenal.

Fountain pens: In the 950s an Egyptian Caliph demanded a pen be produced that would help avoid messy stains on his clothes and hands. A pen with a reservoir for ink was made for him, arguably the first fountain pen. Centuries later we have sophisticated instruments with steel nibs and cartridge or converter-refill options for writing and drawing alike.

Ballpoint pens: We imagine the invention of the ballpoint was shortly followed by comparisons to sliced bread. A most versatile and accessible implement, the ballpoint pen requires little maintenance and ease of use.

Fiber tips: Though still in production, the needle-tipped technical pen has been largely been replaced by fiber-tipped pens, which provide precise consistency of line while being much less susceptible to clogs. Fiber tips come in a variety of other shapes as well, such as bullets, chisels, and brush-like cones.

Brushpens: Combining the expressiveness of a brush with the convenience of a pen, brushpens exist with nylon fiber and plastic tips, with disposable and refillable options.

The weekends this year are October 8th/9th and the 15th/16th.

Free to the public, fine artists and crafters open their studios to showcase their art and share their processes. Visitors create their own self-guided tour using the catalog. Stop by Art Central to pick up a catalog!

Please remember that we have a small parking lot. If you are attending one of our demonstrations or workshops, and it is not a physical hardship for you, please park on one of the nearby side streets. We appreciate your consideration.

For more info on each class, click on the class title which will take you to our calendar!

Know anyone that homeschools? Help us spread the word about these awesome classes offered in our studio by ArtSocial805!

Fun Frames with the Family, Halloween! with Spencer Collins

Intro to Printmaking with Tricia Reichert

Beyond the Basics Watercolor with Virginia Mack

Watercolor Without Fear with Virginia Mack

Cambria Center for the Arts

Cambria’s Center for the Arts is ripe with programs and exhibits to discover! Their current exhibit is John Seed’s “Paintings from Then and Now”, which runs until October 30th. Check out their website for more events!

The proceeds from this fun event will go towards giving the gallery and workshop space at the Art Center Morro Bay a more “contemporary facelift”.

George will be basing Haiku poetry on the drawings made during this event, artwork on exhibit or other images! This is referred to as ekphrastic or poetry based on another art form.

This special holiday event is open to all artists, providing an opportunity to exhibit paintings, photography, sculpture, and fine crafts.

This fine art exhibit is designed for customers who are holiday shopping and looking for special gift ideas!

If you have a show/exhibit coming up, let us know & we’ll help advertise!

It’s the Little Treasures in Life

Add Your Work to Our Treasure Trove!